Dinosaur Park isn’t the only place in Maryland where you can look for fossils. Our great state is also the home of the world-famous Calvert Cliffs, where legions of avocational and professional fossil hunters collect the shark teeth and shells found there. Not surprisingly, Dinosaur Park visitors often ask whether the two sites are related.

The Chesapeake Group rocks of the Calvert Cliffs and the Potomac Group rocks of Dinosaur Park are actually separated by 100 million years. The shark teeth commonly found at the Calvert Cliffs date from the Miocene epoch, around 15 to 20 million years ago. This is very old, to be sure – the entirety of human history could be repeated 2,000 times in the timespan between the Miocene and the present day. Nevertheless, Dinosaur Park fossils are much older. Dating to the early Cretaceous Period, our fossils are a mind-boggling 110 million years old. 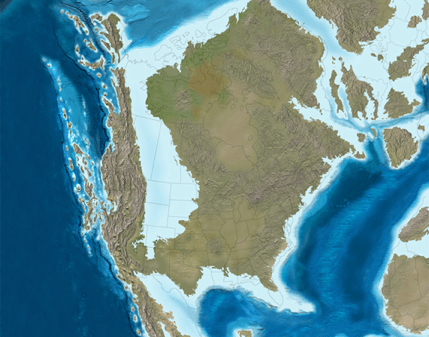 The Earth and life upon it underwent numerous monumental changes between the Cretaceous and the Miocene. When dinosaurs roamed Maryland, eastern North America was sandwiched between a narrower, shallower version of the Atlantic Ocean and the Western Interior Seaway, a body of water that once split the continent in two. This contributed to a warmer, wetter climate than we know today, but it would not last. By the end of the Cretaceous 66 million years ago, North America had become cooler and drier, with more pronounced seasons. Meanwhile, the landscape was transformed by the proliferation of flowering plants, which make up more than 90% of all plant species today.

A mountain-sized asteroid struck the Gulf of Mexico 66 million years ago, wiping out the large dinosaurs and allowing mammals to take over as the dominant land animals. Aside from a hot spell 50 million years ago, the overall trend over the last 66 million years was toward a cooler climate (human industrial activity has reversed this trend in the last two centuries). At the start of the Miocene, a slight rise in sea level led to eastern Maryland being completely submerged under the Atlantic. This near-shore environment was home to sharks, whales, and sea cows, all of which are found at the Calvert Cliffs.

Anywhere we find fossils, we are looking at just one of an endless parade of ecosystems that have come and gone. Despite the drastic differences between Maryland’s Miocene and Early Cretaceous fossils, the past 110 million years is still but one tiny fraction of the 4.5 billion year age of the Earth. Deep time is almost unfathomably immense, and takes place on a scale that we are not used to comprehending. Still, by comparing fossils of different ages, we gain valuable insight into our changing world. The study of past life gives us a long view of the life on Earth, and can help us predict how it might respond to today’s environmental changes.